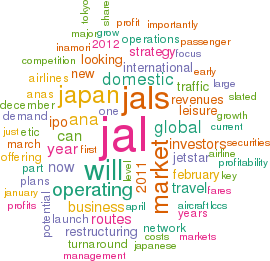 Following its successful bankruptcy restructuring and spectacular financial turnaround, Japan Airlines (JAL) is now hoping to complete a $6.5bn IPO in late 2012. But can JAL present the sort of solid growth strategy and prospects that investors will be looking for?

The process of bringing JAL to the market and relisting it on the Tokyo Stock Exchange began unofficially in early January, when sources close to the airline disclosed that it was looking to raise at least ¥500bn ($6.5bn) through an IPO in the September to December 2012 timeframe.

Later in January JAL’s sole shareholder, state-backed Enterprise Turnaround Initiative Corporation of Japan (ETIC), named the underwriters for the global part of the offering (Merrill Lynch Japan Securities and Morgan Stanley MUFG Securities), who will assist the lead underwriters selected last summer (Nomura Holdings and Daiwa Securities). ETIC is reportedly planning to approach trading companies and lenders about acquiring a 20% stake ahead of the public offering.

The IPO’s timing will obviously depend on market conditions. The outlook for the global economy is currently so bleak and uncertain that any talk of an IPO – let alone one this large — feels premature. But this is a public offering that has to take place because ETIC needs to recoup its investment. It rescued JAL with a ¥350bn ($4.6bn) equity injection in December 2010.

The ¥500bn is regarded as a “bare minimum” needed to get a decent return on taxpayer funds. Even at that size the IPO would be the third largest in Japan. But ETIC is reportedly hoping to raise more. JAL’s rival All Nippon Airways (ANA), which is now slightly larger than JAL in terms of revenues but currently much less profitable, has a market capitalisation of around ¥550bn.

JAL has a compelling turnaround story to present to potential investors. After a

The 14-month court-led restructuring tackled JAL’s cost and balance sheet problems very effectively. The restructuring included closing some 49 unprofitable routes, withdrawing from 11 overseas and eight domestic destinations, shedding more than 100 aircraft, slashing its headcount by about one third, switching to smaller and more fuel-efficient aircraft and rationalising the mainline fleet from seven to four types.

Importantly, JAL’s restructuring included changing from a rigid, multi-layer organisational structure to a more streamlined managerial framework. This was one of the many contributions of Kazuo Inamori, the 79-year old founder of electronics maker Kyocera who took over as chairman when JAL entered bankruptcy. Inamori trained JAL’s management to better monitor cash flow and profits on a daily, weekly and monthly basis and to execute business plans more reliably. A key part of this effort was to update JAL’s overly complicated and obsolete IT systems.

Inamori, who is now looking to step aside and become JAL’s “honorary chairman” (shareholders will vote on new management appointments in February), has also been credited for successfully resisting government attempts to force JAL to resume unprofitable (but politically useful) domestic routes.

The restructuring resulted in an immediate spectacular financial recovery. In the year ended March 31, 2011, JAL achieved a

Amazingly, JAL has been able to maintain that level of profitability in the current fiscal year despite the sharp traffic decline in the wake of the March 2011 earthquake/tsunami/nuclear crisis in north-eastern Japan. In early February JAL reported a ¥161.6bn operating profit (17.8% of revenues) for April-December 2011.

JAL now anticipates operating and net profits of ¥180bn and ¥160bn, respectively, and revenues of ¥1,190bn in the year ending March 31. The operating profit would account for 15% of revenues. It would probably be the best operating margin achieved by any global airline in the current environment.

JAL is now outperforming ANA financially. ANA’s projected ¥90bn operating profit for FY 2011/12 is only half of JAL’s. But ANA’s results are healthy and stable: the current year’s projected operating margin is 6.4%, up from 5% last year. And ANA can be expected to reduce the gap over time; this fiscal year it has been implementing a new ¥30bn ($390m) cost-cutting programme.

JAL and ANA have weathered the post-March 2011 crisis well mainly because business travel recovered quickly. In addition, the large Japan outbound travel market was not so severely affected (for obvious reasons), most regions in Japan were largely unaffected and the rebuilding efforts generated new travel. Also, the airlines have done a good job in matching capacity to demand and stimulating leisure demand with discount fares. JAL has benefited from a new revenue management system introduced in April 2011.

The Japan outbound market saw only four months of year-on-year decline; by December 2011 there were already 11.9% more Japanese tourists travelling abroad than a year earlier (a trend helped by the recent strength of the yen). But the inbound leisure market has remained weak; in December visitor numbers were still 11.7% below the year-earlier level (data from Japan Tourism Marketing Co).

But the airlines have been saying all along that they do not expect leisure travel demand to recover fully until this spring. Importantly, the business-oriented international markets have bounced back; Delta, for example, noted in January that its US-Japan traffic was “close to pre-event levels”. Everything should be back to normal by the time the JAL IPO hits the market.

Can JAL grow its earnings?

Having just shrunk to profitability, JAL is not really looking to grow in the short- to medium-term. However, it needs to grow its earnings, or at least sustain the high level of profitability it has attained. How will it convince potential investors that it can do that?

Internationally, growth prospects are not promising, first, because of the slowdown expected for the global economy in 2012, which could linger on or even become a global recession. Second, JAL faces sharply escalated competition from foreign operators, both established carriers and LCCs, on both short- and long-haul routes, as more airport capacity becomes available in the Tokyo metropolitan area in the next couple of years, and as more open skies ASAs are signed. At Narita alone, total slots are slated to increase by 40% in 2013, and many of those slots will go to Asian LCCs.

Domestically, although the market is large (83m passengers), it has stagnated in terms of full fare/business travel. In recent years ANA, with its strong product offering, has been capturing premium traffic share as JAL has struggled. And now, at the leisure end of the scale, the domestic market is about to see an invasion by new-entrant LCCs, keen to test if the market can be stimulated with low fares.

As a result, the general perception is that the growth outlook for the established carriers, JAL and ANA, is poor – something that has been reflected in ANA’s share price. JAL’s key challenge is to convince potential investors that that is not the case.

The strongest part of JAL’s post-bankruptcy strategy (and one that investors will probably like the most) is that it wants to focus on its traditional strengths: the business travel segment and the key global, regional and domestic markets that have high volumes of business traffic.

JAL intends to “maintain a global network with a focus on pivotal routes that can yield higher business demand”. That means a network centred on major US and European cities and the high-growth Asian routes. JAL’s long-term strategy includes major expansion of international flights at Haneda and strengthening Narita’s role as a global hub between North America and Asia. JAL’s domestic strategy focuses on maintaining a network centred on Haneda and operating more frequent service using smaller aircraft.

The immunised JV with American, which was launched in April 2011, has boosted JAL’s competitiveness on the Pacific. Importantly, it was announced on February 8 that BA and JAL had finally agreed plans for a joint business on Japan-Europe routes and that JAL had submitted an application for antitrust immunity to the Japanese authorities. This was welcome news, especially since ANA and Lufthansa have already launched their immunised JV.

JAL will get favourable publicity this year when it becomes the second airline (after ANA) to launch passenger operations with the 787 Dreamliner. JAL has 35 firm orders, plus 20 options, for the type. The initial 787s have been slated for the lucrative business-oriented Narita-Delhi, Narita-Moscow and Haneda-Beijing markets from the end of March, and to launch Narita-Boston (a new route) on April 22. However, in early February JAL learned that there will be further delivery delays due to manufacturing glitches. The first 787 will not arrive in February as scheduled; it is not yet clear how the route plans are affected.

Perhaps the most controversial part of JAL’s post-bankruptcy strategy is the planned LCC unit. The launch of Jetstar Japan, JAL’s joint venture with Qantas’ Jetstar and the Japanese trading house Mitsubishi Corp., has just been brought forward from “late 2012” to July 3, just so that it can beat AirAsia Japan to the market (ANA’s planned Narita-based joint-venture LCC, which is slated for August launch). It was confirmed that Narita will be Jetstar’s first base. The venture will begin with a network linking Tokyo, Osaka, Sapporo and Fukuoka, a fleet of three A320s (growing to 24 within a few years) and 50% lower fares on average. Jetstar’s primary focus will be on the domestic market, though short-haul international services (South Korea, China) are possible from 2013.

Jetstar and AirAsia are in a “two-horse race” to set up subsidiary airlines around Asia. Regarding Japan, Jetstar CEO Bruce Buchanan was recently quoted saying that the “competition will be brutal and I don’t think everyone will survive”.

While Jetstar Japan will be too small to have any real impact on JAL, positive or negative, the timing is interesting. Is it possible that this could create momentum for JAL’s IPO, because JAL is aggressively trying to retain leisure market share? Or would it turn off potential investors, who may be looking for profits rather than brutal competition for low-yield traffic?