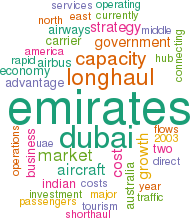 Emirates is positioning itself as the low cost, long–haul global airline. It accounts for almost one–third of the firm orders for the A380, and is set to match Lufthansa’s longhaul capacity by 2010. As the chart opposite indicates, Emirates' unit operating cost is about 40% lower than the lowest cost European major, KLM. It derives its cost advantage from:

Emirates has a clearly defined strategy: namely, to create a long–haul transfer hub in Dubai, which is capable of connecting any two points on the globe. Emirates' strategy is unique in that it plans to serve the connecting market with just long–haul aircraft, whereas most hubs in Europe and the US have an expensive short–haul network (generally competing against LCCs) feeding into a hub. Hub–and–spoke networks generally consolidate short–haul traffic into long–haul operations but Emirates mainly has longhaul traffic flows (just 20% of revenue is derived in the Middle East).

The strategy is being augmented by increased point–to–point demand to/from Dubai, which is being assisted by the development of tourism infrastructure.

Emirates, in conjunction with the government, is promoting Dubai as a leisure destination.

The Government of Dubai is attempting to diversify its economy from traditional oil–related industries and the rapid development of Emirates is a key part of this strategy.

It has a $33bn investment programme in infrastructure (including the airport), technology, tourism, and knowledge/health. Indeed, a measure of the scale of the commitment to tourism can be seen in the investment in "Dubailand", at the present worth $5bn.

Slated as a "Disney in the Desert", it will be double the size of Disneyworld in Orlando, Florida. To date, this investment programme has been successful, as between 1990 and 2003; Dubai’s economy grew at a CAGR of 8%, driven by increases in trade, industrial output, shipping, and air transport.

This connecting strategy takes advantage of the geographical position of Dubai, which is approximately equidistant from the major cities of Europe and the Asia Pacific.

Furthermore, using the new Airbus A340- 500, Emirates can now serve Australia and the US direct and economically from Dubai, significantly improving the attractiveness of these services, particularly for business travellers.

For example, Emirates recently introduced the A340–500 on the Dubai–Sydney and the Dubai–Melbourne routes, allowing non–stop service. Emirates is now aggressively marketing Dubai as a convenient alternative for both business and leisure passengers heading to Australia. This is of most concern to British Airways, which deploys around 3% of its long–haul seat capacity on the Australian market (this is the capacity BA operates to Australia; it does not include the capacity BA has access to through the Joint Services Agreement with QANTAS). Australia has become a key market for Emirates (excluding Dubai, about 12% of seat capacity is deployed in this segment) and ongoing growth is expected.

However, the primary engine for medium- term growth is expected to be India. Emirates is the largest foreign airline in India, operating to 12 destinations on the Indian subcontinent, which accounts for 20% of its capacity (excluding Dubai).

The rapid growth of the Indian economy and this strong market position should underpin the growth of Emirates.

Of course, if the Indian economy falters, Emirates would be forced to switch capacity onto more mature routes, which would be negative for the industry in general.

The main geographical weakness for Emirates has been North America. Once again, the Airbus A340–500 has helped Emirates address this issue. Direct services from New York to Dubai were introduced last year. In addition to the flows of mainly business passengers from North America to the Middle East, this service is a convenient connection for the significant traffic flows between North America and the Indian subcontinent. Emirates intends to take a material share of these markets by introducing direct flights from Dubai to Washington, Toronto, Los Angeles and Boston.Emirates growth is to some extent dependable on favourable regulatory developments.

Political and/or bureaucratic obstacles could inhibit the growth of Emirates.

For example, Emirates currently only has the right to fly to Paris once a day whereas it flies to Frankfurt twice a day (in addition to flying to a number of other German cities).

Such restrictions in France are somewhat surprising, given the importance of Emirates to Airbus. That said, rapid global deregulation would present concerns for Emirates. The bilateral system has led to some markets being under–served on a point–to–point basis. This means that the excess demand spills to hubs such as Dubai. A case in point is the UK–India market, which British Airways has described as "grossly under–served".

A recently renegotiated bilateral agreement has materially increased the amount of allowed capacity on this route, which could lead to market share degradation for Emirates.

The other possible threat to Emirates comes from potential overcapacity in the Middle East long–haul market as three local rivals attempt to emulate its success.

Gulf Air: Operating as the national carrier of Bahrain, Oman and the UAE. Its fleet consists of 19 widebody and 11 narrowbody aircraft. After four years of losses the carrier produced a marginal profit in 2004.